The Real Marathon of Berlin is THE race for Rollerblade. The brand is the main sponsor for several years now. But also, three Rollerblade skaters won the biggest event in the world: Nicolas Iten in 2007, Luca Saggiorato in 2009 and Severin Widmer in 2010! The three did it in different ways (alone for Iten, in a bunch sprint for Saggiorato and in a small group for Widmer), which means that they managed to control each kind of situation. What was the situation in 2010? Nicolas Iten (Luigino Rollerblade) and Julien Levrard (Rollerblade Speedodrom) will explain it…

Berlin woke up under grey skies and rainy clouds on Saturday morning (the 25th of September). For few hours, the weather was uncertain, but close to 12:00, it was sure that it would be wet and slippery. The start of the WIC of Berlin was scheduled at 16:00: everybody knew that the race would be hard and the concentration high. “It was a little bit like three years ago, when I was able to win. It was raining and as everybody knows, the roads were very slippery. I like these conditions, because that makes the race harder!” explains Nicolas.

Two team of Rollerblade were at the start: Luigino Rollerblade, with successful Severin Widmer (winner in WIC Gdansk and FIC Trans’roller) and Nicolas Iten, and Rollerblade Speedodrom, with Thomas Boucher (winner in FIC Les Herbiers and French national team member) and Julien Levrard. Both of the teams adopted the same kind of tactic: “it was to be present in the attacks, but not to give all the power” says Nicolas. Julien explains by his side that he wanted to control carefully the Netherlanders, because he knew they were very strong: “I raced twice in the Netherlands this year, and I am aware of their level…”

The two teams also knew that they were racing for some podiums. The team mates were in some good shapes, and they took many medals recently. They were not disturbed to see a fast start and many attacks from the beginning. Nicolas argues that “if one group was chased, the next attack started. The peloton was always in one straight line, it was almost impossible to overtake the other skaters.” Each time, there was at last one skater of the Rollerblade teams in the breaks, until the end of the marathon! Thomas Boucher and Nicolas Iten attacked in some more and more strong manners from the 15th kilometer. Nicolas: “all of a sudden, a group of 10 skaters was built. Fortunately, Severin and I were in this group and we kept the pace fast.” Julien: “after 40 minutes of race (soon after Nicola”s attack), Thomas attacked strongly. There was a new break, with few favourites in like Bart Swings and Fabio Francolini.” This was the winning group, because these skaters managed to reach the Brandenburg Gate in order to fight for the gold.

The last kilometers were decisive. Julien decided to slow down for a while in order to take a position in the back of the leading group: “I wanted to wait for the sprint, but also to watch from the back, considering the fact that Thomas was in the front.” It was the good tactic, because in the same time, close to the Brandenburg Gate, Nicolas Iten was preparing for a last and decisive attack. 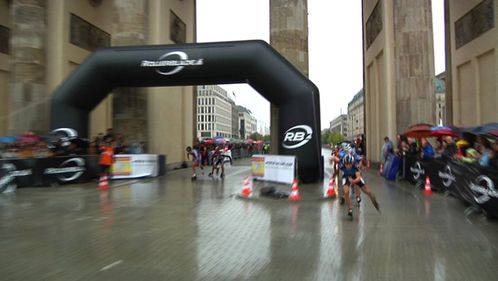 “I felt good, but I was a little sick, because I caught a flue some days ago, explains Nicolas. So I decided to work for Severin. 300m in front of the Brandenburg Gate and 600m from the finish, I started the sprint for Severin, to take him to the first position of the group. 200m before the finish line, my power was more or less over, and Severin passed me…” In the same time, Julien was trying to over pass Severin, but it was too late. Fortunately, his team mate Thomas Boucher took the right side of the road and pushed hard to the line. You know what happened then: Severin captured his probably biggest victory, and Thomas the bronze. After the race, Julien was a little bit disappointed: “I was expecting to catch a better ranking, because I felt good during the race. But it is a 6th place in Berlin, and this is great. I waited for Netherlander Gary Hekman’s sprint: he was close to the bottom of the peloton at 200m from the line, and he managed to finish at the second rank… Well, that is unbelievable!” Nicolas analysis of the race is positive, of course: “I was sprinting to the 8th place, after having doing my job. I must say, I was almost as happy about Severin`s victory, as I won this same race three years ago, because I knew I did a good job for him. We expected a podium place, because we both knew how to skate under the rain. And at the moment, we are in a good shape. But the win was a big extra for us!”

Severin, Nicolas and Julien will now compete the final stage of the German Inline Cup in Köln, West Germany. “This is a very difficult course, especially if it rains as the two last years…” says Nicolas. But they all know how to do it, for sure!